It’s a jungle out there.

Foxes do not take lambs very often.  One reason the local farmer chooses Lleyns is that they are good mothers and will defend their lambs.  Usually if a lamb is taken it is from a multiple birth and the fox grabs a lamb while the mother is defending its sibling. 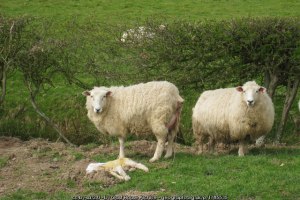 Two days ago something unusual and distressing for all happened.  During lambing the flock is regularly checked 24/7.  During one of the checks the night before last a partly eaten newborn lamb was found beside its dead mother.  The mother had no sign of violence on her – no marks.  But she was dead as well,  most likely from a heart attack.

In general foxes prefer to catch wild prey.  Certainly the woods that fox came from are full this time of year with pheasants.  But anyone who has lived in an urban or suburban area is likely to have come across ‘urban foxes’ who have foresworne the rural life to live on a diet of refuse.  My experience of those foxes is that they are rarely like the large, vibrant, thick-coate

d foxes we see in the Valley.  They are usually rather thin, often mangy.  In short, they are often foxes that have moved in for easy pickings because they are old or unwell. 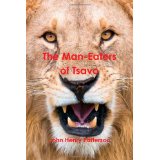 The Man-eaters of Tsavo is a story of man-eating lions in Africa in the late 19thC.  It is still in print.  I suppose that part of the fascination associated with man-eating carnivores is due to their rarity, as well as the fact that for the majority of the world’s population it is not a present danger.  Even lions seem to prefer ‘wild’ life to humans for dinner.  This link looks at various hypotheses for why lions should find human flesh desirable.

The shepherd’s problem is that somewhere in the vicinity there is a fox which has discovered that newborn lamb is easy-pickings; especially if, as appears to be the case, the lamb was attacked whilst the ewe was giving birth.  Any fear that fox may have had of sheep because of their human association is now dispelled.  And wild animals are also able to learn from each other, as anyone who remembers the days of tits attacking milk bottle tops to extract the cream will recall.

And there is also the grief and horror of the poor ewe’s experience to deal with.  To farm livestock successfully one does need to have a deep empathy and care for the animals.  Each and every animal is a relational asset as well as a financial one.  And a whole year’s work and nurturing has been focused on building up a healthy ewe who will produce a healthy lamb (or two).