Straw for thatching needs to be well-dried.  Stooks and ricks were a two-stage process which enabled straw to be cured so it was in the right condition for thatching.  However, problems arise if there is a wet autumn because the straw is unable to dry out correctly.  As mentioned in the last post (Putting the Lids), 21st C technology has come to the rescue in the form of loaders which can shift sheaves to barns.

Manor Farm straw is threshed by Dorset-based Symonds’ Thatchers.  These photos were taken this year, on the 10th October. 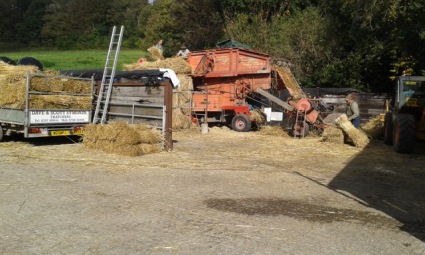 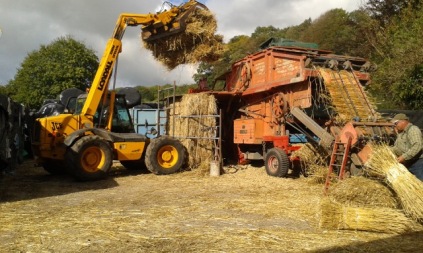 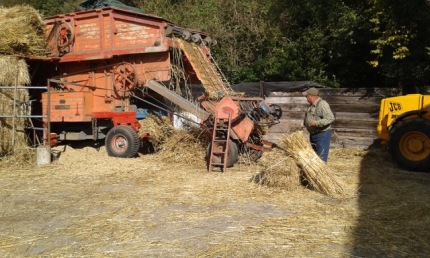 from Will Best in Godmanstone…. 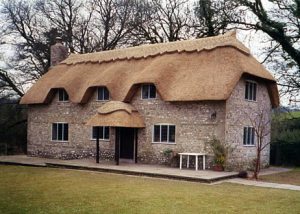 It is the time of year at Manor Farm  for the visit of the threshing machine. When I was a small boy this was a commonplace on most of the farms in Dorset, but now I only know of 3 or 4 where it happens.

Traditionally water reed was used for roofing  in areas where it was grown such as Abbotsbury, longstraw was used up country, but over most of Dorset it was combed wheat reed. Reed combing, which extracts all the long straight straw from a sheaf of wheat, used to be a winter manual job (Tess had to do it at Flintcombe Ash in Hardy’s novel) but in the early 20th century the mechanical reed comber was developed to put on top of a threshing machine; and, 100 years later, no one has successfully found any better way to do it. 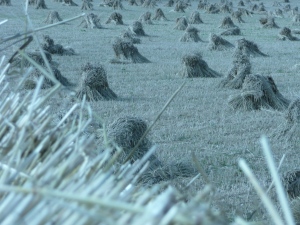 A Stooked Field at Manor Farm

So at harvest time we cut the wheat, while it is still a bit green, with a binder and stand up all the resulting sheaves in stooks, otherwise known as hiles, shocks or stitches, 8 sheaves to a stook like tiny houses: the result is rather beautiful. Once the crop is ripe and dry, the sheaves must all be carried into the dry. In the past this meant carting with wagons and trailers, building ricks the size of small houses, and covering them with thatch or tarpaulins. Rick building is a specialised craft and must be done correctly or the wheat can spoil, or be very hard to pull out when the time comes. 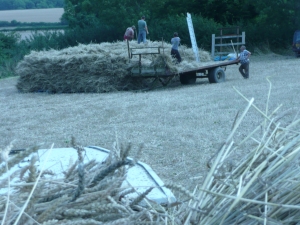 Now we have mechanised this by making big string tied bundles of up to 100 sheaves and using a loader to stack them in a barn, and later, to take them from the barn onto a platform beside the tractor powered thresher/ reed comber which separates out the reed, grain and rest of the straw.

This is the process, but the vital bit is the growing of the wheat. Modern varieties are too short; so old, longstrawed ones must be sown. Nitrogen fertiliser and other agrochemicals weaken the straw, so the crop must be grown organically, or with very few inputs.  This means that in order to grow a good tall clean crop which will stand up well until harvest, you must have good natural fertility in the soil: we only grow ours after a grass/clover ley and an application of composted manure. The whole process is quite complex compared to modern cereal growing, but it must be done if we are to continue to cover our historic buildings with the correct material, and it helps keep alive crafts and methods which go back for millennia. 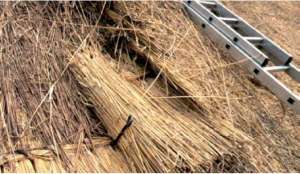